A series of traditional Chinese medicine video programs produced by People’s Daily Online show how traditional Chinese medicine (TCM) is practiced and promoted in China and the United States. The videos will also show how TCM has been used to improve the health of people living in different communities. In this short film, we will discover how magical TCM orthopedics is.

An old Chinese proverb says that if a person hurts one of his bones, he will have to spend 100 days to restore it. Different from Western medicine’s treatment for bone dislocation, TCM practitioners’ hands can be able to restore bones and relieve tendons, and the body can feel relieved in just a few minutes, according to the short film.

A patient with knee stiffness went to the orthopedics and traumatology department of the traditional Chinese medicine hospital in Guangdong Province of China. The chief physician, Dr. Lin Dingkun, who, without any help or auxiliary equipment or medicine, treated him only by using his finger to press, knead, rotate and shake the patient’s diseased knee. The patient felt more relaxed and could gradually bend his knee again.

Lin thinks the source of the pain is where the tendons and bones are connected. As a result, one suffers from bone dislocation and other ailments when his tendon is out of balance.

The most distinctive practice of TCM orthopedics is manual treatment. It is based solely on hands, manipulative experience and TCM theories, such as human meridians, bones, joints and reflex zones. According to the short film, the practitioner may be able to help patients with chronic orthopedic injuries cleanse their meridians, adjust their Qi and blood, heal injuries, treat chronic muscle and bone disease, and relieve pain.

More and more people suffer from lumbar and cervical osteoarthritis in today’s society. In the short, Ms. Yang is a typical patient. Lin concluded that there were bumps and misaligned joints, then he treated with a series of simple manipulations, such as pressure on acupressure points, meridian smoothing, and joint reduction manipulation, which restored the balance of tendons and bones.

Dr. Zhao Guangwei treated a patient with misaligned fourth and fifth thoracic vertebrae in California. First, Dr. Zhao loosened the patient’s vertebrae by twisting, rubbing, and manipulating the back, then pushed with the patient’s exhale, “slamming” the bone back. 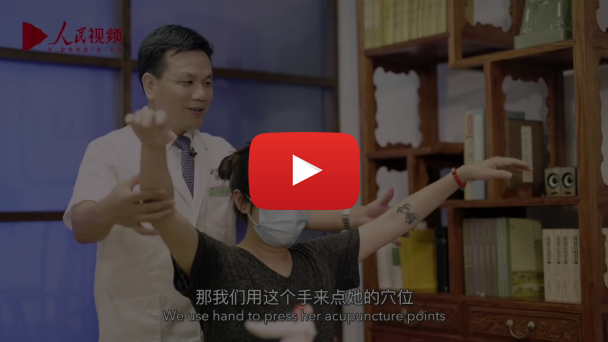